I bumped into this story from “The Exponential View”. This is a newsletter that arrives by e mail once per week.  I highly recommend it.

A link to the story. And a peek

The burst of tree planting was part of a wider reforestation campaign named “Green Legacy,” spearheaded by the country’s Prime Minister Abiy Ahmed. Millions of Ethiopians across the country were invited to take part in the challenge and within the first six hours, Ahmed tweeted that around 150 million trees had been planted.

But there is some bad news as well

It turned out that July was the hottest month in human history. Also, 2018 was our record year for burning fossil fuels.

Whether Donald Trump wants this to happen or not, awareness of the dangers of climate change is growing. My best guess is that it will grow further and that lots of people will get more angry about it as they begin to realize that their lives, and the lives of their kids, are headed for disruption.

What will they, and we do about it? Good question. Part of the problem will be addressed by innovation. Sustainable energy production costs are falling and will continue to fall, meaning we are weaning ourselves from fossil fuels in at least some areas.Tony Seba predicts that

Clean Disruption projections (based on technology cost curves, business model innovation as well as product innovation) show that by 2030:
– All new energy will be provided by solar or wind.
– All new mass-market vehicles will be electric.
– All of these vehicles will be autonomous (self-driving) or semi-autonomous.
– The car market will shrink by 80%.
– Gasoline will be obsolete. Nuclear is already obsolete. Natural Gas and Coal will be obsolete.
– Up to 80% of highways will not be needed.
– Up to 80% of parking spaces will not be needed.
– The concept of individual car ownership will be obsolete.
– The Car Insurance industry will be disrupted. The taxi industry will be obsolete.

Will that be enough to avert disaster? No one really knows.

And we may need to get used to the idea that not knowing this is a major piece of news in itself. It should be a headline in NYT — We do not know if we are headed for climate disaster. But as Al Wenger points out, we are hugely distracted from this story by  what we see in media. We do not see the monster staring at us from the mirror. We do not yet accept that we are potentially the agents of our destruction.

. How will we react to this growing self.-awareness?  Stay tuned on this one. It is one of the huge stories of the 21st century

If I were a billionaire, this would not be my routine

To avoid his thoughts getting cluttered in the morning, Zuckerberg wears the same outfit almost every day: jeans, sneakers, and a gray T-shirt.

I get the feeling hat Zuck thinks he is sill in college. What do you think?

In fact, quite of few of the daily routines of tech zillionaires and CEO’s are odd Like Jack Dorsey who does not eat on weekends unil Sunday night.

Wha’s that about, Jack?

A few months ago, dribs and drabs of information started appearing in the media that the Tallinn Branch of Danske Bank was suspected of laundering a lot of money. Nicht Gut!

“The issues related to the portfolio were bigger than we had previously anticipated,” Andersen told AFP. “We take the matter very seriously, and are committed to understanding the full picture,” he added.

A Wall Street Journal (WSJ) report stated US$150 billion had transited Danske Estonia “from companies with ties to Russia and the former Soviet Union”, 2007-2015.

last night i had cereal with milk for the first time. life changing. 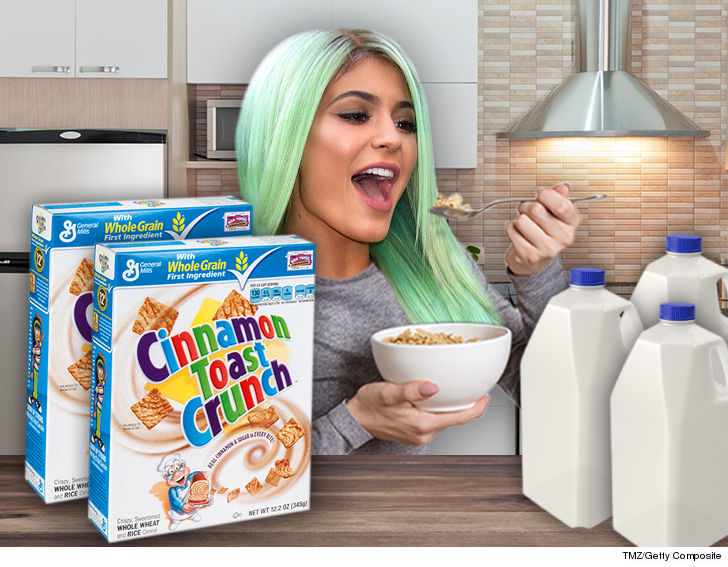 So much so, that Kylie had to say more

… she later clarified and added, “I always liked cereal dry, I never bothered to put milk.

I do hope that Kylie us bit going to get into the habit of tweeting “last night I … for the first time …” Whether it is food, or something else, there are some things that one should enjoy alone.

But now that the cat is out of the bag … or shall we say … the cereal is out of the box, could this have really been “life changing”? Perhaps so. And if so, it gives one a sense of the type of lives celebrities lead. Lives that can be thrown off a cliff by a box of cereal.

Or was this Kylie’s sly way of satirizing her celeb status ? Maybe she was thinking that her fans breathlessly await any and all news from her lips. Whether that is popping a pimple, using up the last sheet of toilet paper, or perhaps … do we dare mention it — farting in the ladies room?

Stay tuned on this one. Perhaps Kylie will try something new for lunch!

The Novichok suspects are two Russian men who British authorities say are responsible for poisoning an aging ex-Russian spy and his daughter, Vladimir Putin himself has come to their defense, supporting their story that they were just tourists.

If so, they were rather odd tourists.

The biggest hole in the pair’s story is the fact no record of either men exists from before 2009 when passports under their names were issued, which the report says “suggests the two names were likely cover identities for operatives of one of the Russian security services”.

It has already been reported in Russian media that the passport numbers of the men are separated by only three digits (-1294 and -1297) meaning they were issued at almost exactly the same time.

(Their) short, off-season international jaunt just happened to coincide precisely with the poisoning of former Russian spy, Skripal, and his daughter Yulia, with Novichok, a military-grade nerve agent developed by the Soviet Union.

But the passenger manifest of Aeroflot reveals the pair only booked their flights and checked in online the night before they travelled.

Here is the source.

It is human nature when something bad happens to want to know who the villain is. When we do not know, we hare a nagging sense of uncertainty. Perhaps, first from the fear that the villain may be dangerously close by. But long after any real danger has passed, we still crave the answer to the question – who is to blame for terrible things that  are not supposed to happen? Who gets cast out from polite society?

In this regard, Hitler has been convenient. He and his henchmen really did horrible things that helped lead the world to war, and then they made the war more horrible. By doing us the favor of losing the war, Hitler and his henchmen gave the allies the opportunity to blame them for everything. That was important because it  gave the survivors of the war a sense of certainty that enabled them to move on from the horrible things that had taken place. Some even felt a touch of nostalgia for the moral clarity they felt in fighting “the good fight”.

That sense of certainty that good triumphed over a known evil took America all the way to the 1960’s. Of course, not all evil had been vanquished. There were still the communists. But they too were a known evil. We opposed them because we knew they were the villains of the story. They may have been threatening, but they did not threaten our certainty in the right. We were the good guys, and they were the bad guys.

Perhaps that certainty is what made the Kennedy assassination so shocking. In the year of our Lord 1963, he was murdered by rifle shots while he was riding in a presidential motorcade in Dallas, Texas. There needed to be a villain, and law enforcement produced one – Lee Harvey Oswald. But out of nowhere, and just a few days later — before Oswald had a chance to tell his story — he was  murdered by Jack Ruby. The world seemed to have gone mad! Who was behind it all?

Except many have not moved on. It may well be that the Warren Commission conclusions are correct. Some very smart people think so based on their review of the evidence. But a number of people think that this does not explain what really happened. They believe that something more sinister was at work and they frantically look for loose ends in the evidence. Indeed, there seem to be loose ends. And the loosest of loose ends is Zapruter 313.

Abe Zapruder was an amateur film buff. Just for fun, he decided to make a home move of the Kennedy motorcade as it drove through Dallas. And that is how he ended up making a home movie of the JFK assassination. In itself, this would not be big news. But in frame 313, Zapruder captured a part of the scene that haunts us to this day. Frame 313 apparently shows Kennedy being hit by a bullet in the forehead. You can see his head lurching back.

In other words, if the images really do capture what happened, Kennedy was not killed by Oswald, shooting from behind. He was murdered by someone shooting from the front.  That directly contradicts what the Warren Commission concluded.

There goes the nice certainty. The door is open to speculation. Who did it? Who was that person or persons working for? Why did they do it? How did they cover it up? Who else knew?

At some point, the controversy will lose its immediacy. Perhaps it already is. Like many other historical mysteries, we will ponder it from time to time, but we will no longer feel threatened by it. There are plenty of these mysteries. But for now, we cannot quite let go. We cannot let go because we have not yet left that historical era. In a weird way, we still live in 1963. Why? Because the villain may still be on the loose!

A quick follow up —  I mentioned that history is fully of mysteries that have not been solved, and are still talked about. Here are a few head scratchers

There are many, many more. And we may need to get used to the idea that hundreds of years from now, in the light of other more current mysteries, the Kennedy assassination will seem as remote as the trial of Anne Boleyn and the death of Amy Dudley. Still unresolved. Puzzling. And by then, less threatening.

If you have heard about the Stanford Prison Experiment, you are excused from having to believe deeply in people. In that experiment, researchers said that they could induce people to deliver pain to others — even hearing their reactions —  by introducing an authority figure. In other words, we are a pretty weak willed species.

But it turns out that the researchers who did the Stanford Experiment faked the results. It was a fraud.

Wow! Not only that, it is coming out that a lot of other social science experiments were less than credible as well. Like the marshmallow experiment. And the one that supposedly demonstrated that will is like a muscle.

It seems that we have been the subjects of another type of experiment —- testing how gullible we  are.

´This dude is not to be deterred from getting a round of golf in … no matter what!  Image from BI 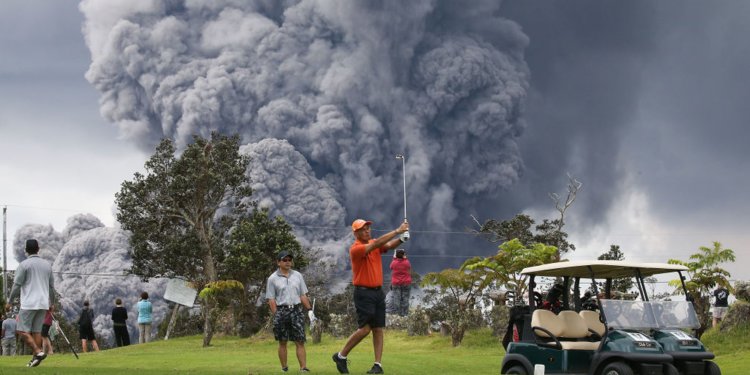