From “Where There’s a Will” on “Missed Opportunities”

It’s well known that John Betjeman, summing up his regrets on his deathbed, said “Not enough sex.”

Mortimer goes on to relate a story from his youth involving a proposition from a bald lady,. He thought this sexual encounter would be more feasible if he took off his glasses so he could not see what was before him. We are talking about these kinds of spectacles

After I’d parked the car I rang the top bell, as I had seen her do beside the front door, and was rewarded by a deeply sexy voice saying, “come upstairs.” I obeyed, with my glasses off, and found the top flat’s door opened by a blurred but distinctly bald figure wearing a dressing gown. I threw my arms round it, only to discover it was a bald.headed, quite elderly man and I was in the wrong house.

Oh dear.  Reminds me of a scene that Mr. Auberon Waugh might dream up. Auberon was the son of the famous novelist, a bon vivant and wickedly funny essayist for Spectator. 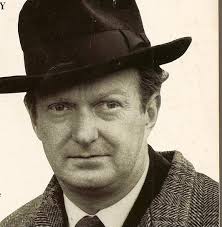 I will share some of his stories in the next several days! Stay tuned!

From “Between Meals“, published first in 1959

The one thing about the glorious diversion that is no longer written, or if it is still written, is never published is that it remains the most amusing as well as the most instructive of human activities, and one of the most nearly harmless … (even) in France ….

The glorious diversion? The man did have a way with words. BTW, I slightly altered the meaning of the last phrase in the quote. Liebling was quite the Francophile and “Between Meals” starts off with dining in Paris —  a rollicking  reminiscence of colossal crapulence.

Here he is, taken from “The Church of Liebling”