Here is the lead in

The Inn at Perry Cabin is a colonial estate set right against the Miles River and feels like a home away from homes thanks to the the serenity of the Eastern Shore. With sprawling lawns, vibrant hydrangeas everywhere you look, and the ebb and flow of sailboats adding to your skyline view, you’ll be charmed right from the start.

BTW, you can sail there via the Inn’s own yacht from Baltimore!

And here is the photo!

Errr … did I mention sailing? Yes, this is all about sailin

and eating, of course!

Mykonos is known for a rather wild night life. But there is another side to it. At the Grace Hotel, you are fare enough removed to hardly know it is there. 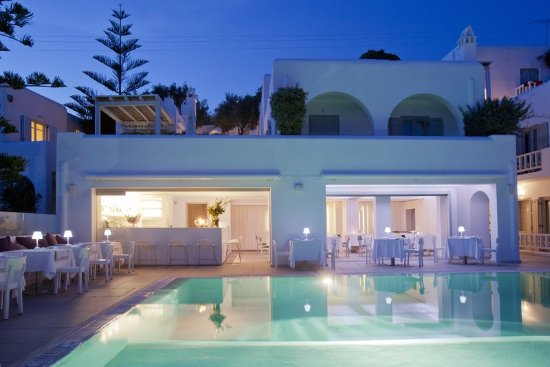 Forbes offers a nice fluff piece about the Hotel.

A mile and a half down shore from Old Port, the five-story property cascades down hillside; a series of spacious bungalows within steps of the beach. Nearly every room here is adjoined by its own terrace, featuring unobstructed views of azure seas — and your very own plunge pool. Inside, guests are provided a bespoke experience by way of scents, fragrances, and bath oils selected prior to check-in, through an online survey. Even pillow styles and bedding can be customized.

Looks very tempting! And the Food?

The sole restaurant and bar on-site is suspended on a third floor patio, surrounding an infinity pool. Although formal menus exist, both a beverage director and kitchen manager work the floor throughout the afternoon and evening, acting as personal taste concierges. Emerging on the plate and in the glass is artfully rendered gourmet, all inspired by local flavors.

I’m there. How about you?

I wrote below about the  trend towards “food as motivator” in the global travel market.  And there are other types of experiences that are motivating travel to places other than the usual tourist destinations. How about this one?

On Tuesday, Conrad Maldives Rangali Island revealed that they are building a new undersea residence immersed 16.4 feet under the Indian Ocean that is expected to open in November 2018 and cost $50,000 for a one-night stay. 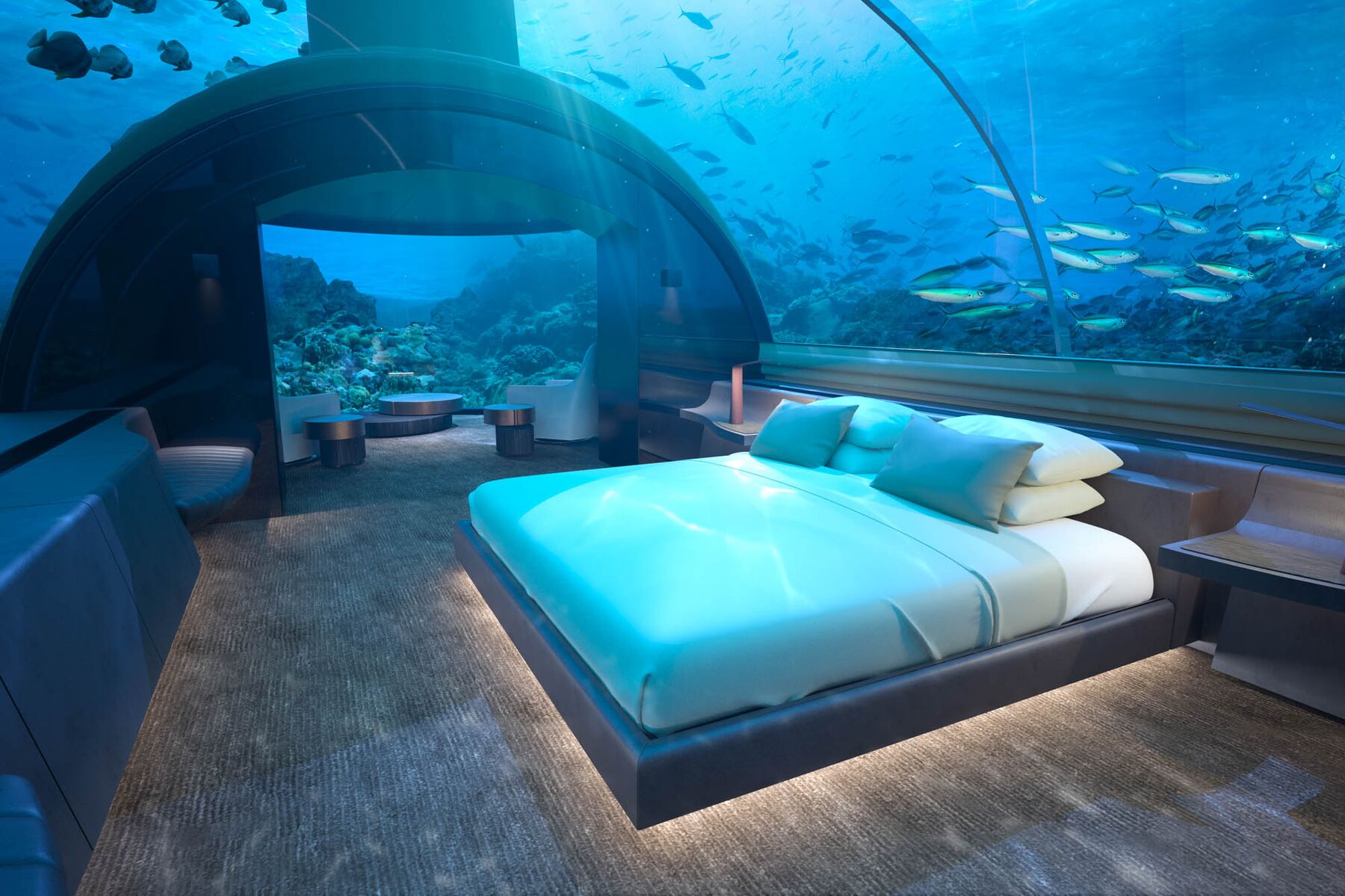 Hmmm … $50k per night is just a bit beyond my budget. But you get the idea. Blooomberg writes

Here (inthe Maldives) more than anywhere else on Earth, it’s extravagant design features—rather than a convenient location or knockout restaurants—that make a hotel.

And if the $50k per night price tag bugs you

The starting price of $50,000 may sound like a lot to pay per night, but the region claims a handful of private island villas at comparable price points—and they’re popular, too.

They do offer lots of services

… guests who book the villa get flown to their own private seaplane jetty and get picked up in a speedboat that’s theirs to use for the rest of their stay. The suite itself is set apart from the Conrad’s beach villas and over-water bungalows so that its residents don’t have to see other humans—or set foot on dry land—during their entire vacation, if they don’t want to. Four dedicated butlers live in a nearby structure to facilitate round-the-clock service, and everything—from a chef to cook your meals to a set of jet skis and an on-call fitness trainer—is included in the (hefty) price tag. Guests are even upgraded to Diamond Honors Hilton status and given a 90-minute spa treatment per day.

And if you need more underwater experiences, there is the Ithaa underwater restaurant not too far away 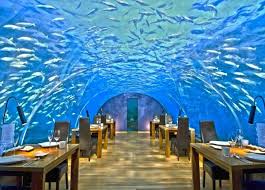 I do not expect that we will see lots and lots of underwater hotels. Apparently, they are rather difficult to construct. A  Dubai developer ran into trouble

In Dubai, the developer Klenienst has been developing a community of partially submerged homes called the Floating Seahorse within the cluster of islands known as the Heart of Europe. The project was announced in 2015 with a projected completion in 2016; yet, only three such homes have been completed to date. According to a local news source, one of those sank near the Burj Al Arab, another “toppled into the sea while being transported onsite,” and the third has survived as a prototype that’s being stabilized with sandbags.

But I do expect more creativity in designing where one stays and how one stays overnight in tourist destinations that are in tune with the host country’s locale.

Car salesmen are not my favorite people. I don’t blame them. It’s their job. Larry David does a great spoof of this

But what if you could eliminate the sales puffery and get exactly what you want. The idea would be to combine online tools with digital tools in the showroom. And that is what Pure Pursuit is trying to do.

Pure Pursuit’s most valuable assets probably lie within its Kansas City, Missouri showroom. Customers first encounter “Chelsea” — the company’s holographic, 3M-powered digital assistant — which will get you acquainted with the space and the luxury vehicles on hand there.

Combined with beacon technology, tablet computers can display information and videos about the cars as you walk up to them.

There was a time when grand houses did not have bathrooms. One bathed in public facilities. The idea of installing a tub into a room that was used regularly presumed one had sufficient numbers of servants to fill the tub with hot water. So it was a luxury indeed that later on we could all enjoy this by with a twist of a knob.

But this is apparently not enough. Luxe bathrooms emerged. These might include a telephone that you could reach from the tub. And of course, a bidet. But these are nothing compared to new products coming out “ultra-luxe bathrooms”. To get that feeling, your bath should not just have facilities. it needs a view.  Something like this

Check out these beauties if you long for a higher standard of luxury while you perform your daily ablutions.

We don’t tend to think about lions in positive emotional terms. After all, they are big and they are predators, right? But watch this video and you might change your mind about them. I loved it! Indeed, i loved it so much that I did a Google video search for “lion love” and found a bunch. here is one. Enjoy!

What makes us curious? It may be that we (humans) need the neural pleasure we get from curiosity. In other words, we are hard wired to enjoy life, if we allow ourselves to do so.

It started with the negroni, a drink that I only really enjoy in the summertime. Tony Bourdain did a fun promo for negronis that catches the flavor of the thing.

But what about the other months? I am inspired in the springtime  to concoct whiskey sours. The real ones, no mixes, please. But in the autumn? There is still a hint of summer in the air, so a reminder of compari would work for me. Aperol ? An Aperol fizz? Hmmm … this just might work! You can get the recipe from Saveur.