The lyrics of a well known song start off this way

Of course, we know that you cannot actually buy your way to heaven. And while we are at it, just what happens in heaven anyway that makes it such an eternal “peak experience”?  In “Man and Superman“,  good  old Bernie Shaw had the temerity to lampoon the experience as an eternal tea party — boring!

What’s more, here on earth, you can have a lot of fun meandering through shops looking for things that you like. The august Sir Kenneth Clark commented that a certain amount of “superfluity” is necessary for civilization to flourish (as it did in Amsterdam in its golden era).  It enables more transactions, which in turn, enable more high level craftsmanship. And of course, more fun. for everyone  Put more directly, shopping starts off a virtuous circle! So, as Bertie Wooster might proclaim to Jeeves “What we need, Jeeves,  is more shopping!”

Thus, while one may not take shopping so, so seriously, it can not be dismissed as a mere symptom of an overly materialistic mentality. Not at all! It  gives one  a chance to see life more broadly. To escape the dull confines of hand me down lamps and “level up”, so to speak. After all, the great crafts are as much symbols as they are functional objects.

And then there is the Paris shopping experience.

HIP Paris offers their picks for places you can find yourself and then  nip off for an espresso.  Yes, at least some are in the Marias. 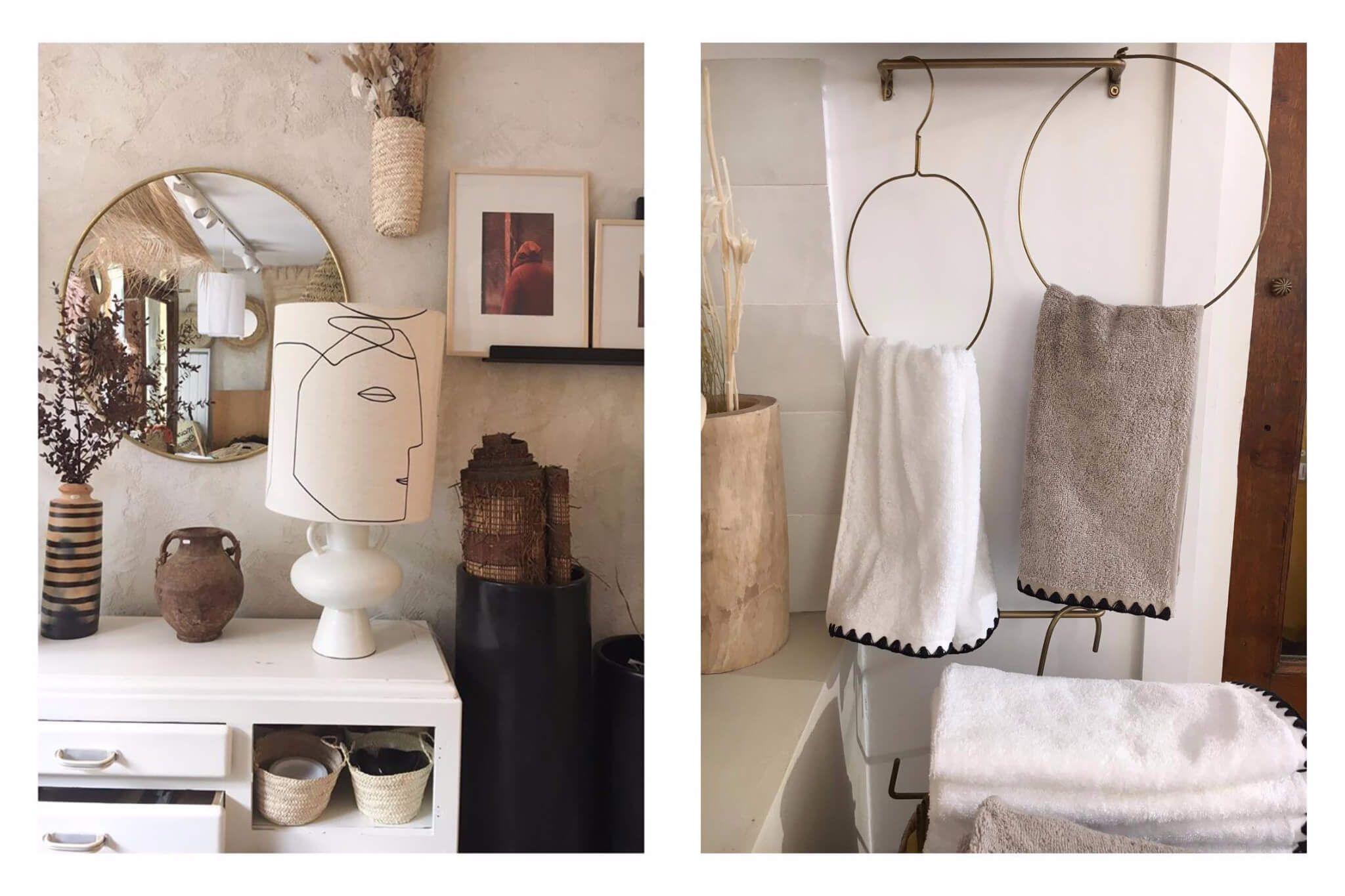 This is “Maison Omani”.

Maison Omani features homewares and decoration from Morocco, Tunisia, Turkey, India, Nigeria, Syria, France, and more. I was surprised by how reasonably priced their products are. They have lovely big bath towels with embroidered edges that are 100% cotton and made in Turkey for 28€ each, and handmade in France porcelain matching espresso cups and saucers for 20€ each.

A Trulli? They are quite the thing!

Ah the trulli houses. Unique, iconic and found only in the beautiful southern Italian region of Puglia. What is it about these quirky cone shaped houses that has people from all over the world fascinated by them? 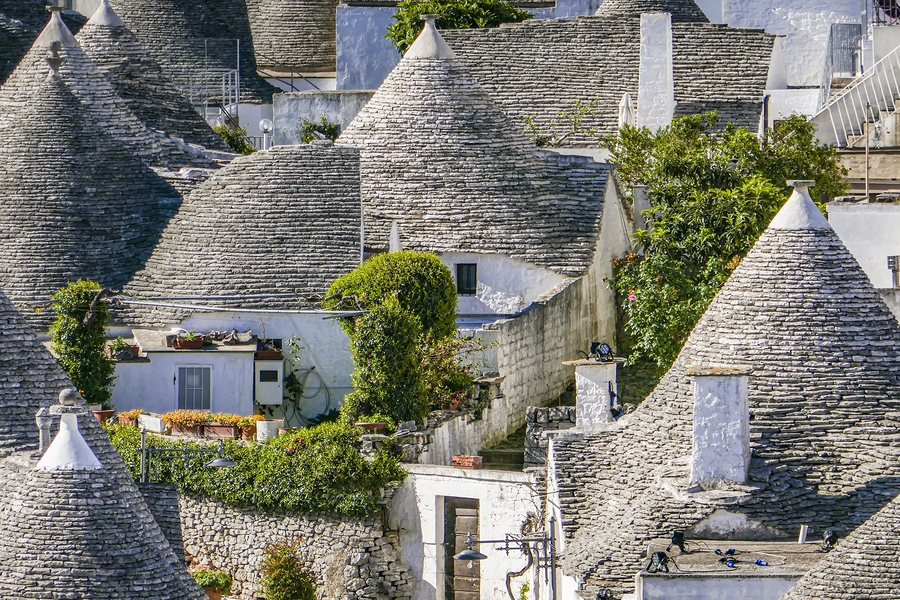 And if you want to buy one? Here is a primer on what that would entail. 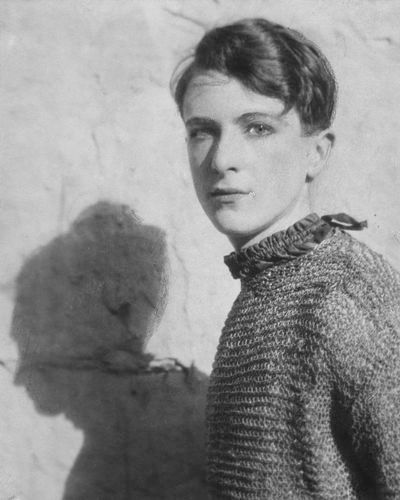 And there is good reason. Beaton’s photographs of that crowd and from that era are as remembered as the people themselves.  He would go on to become one of the most iconic fashion photographers of the century. 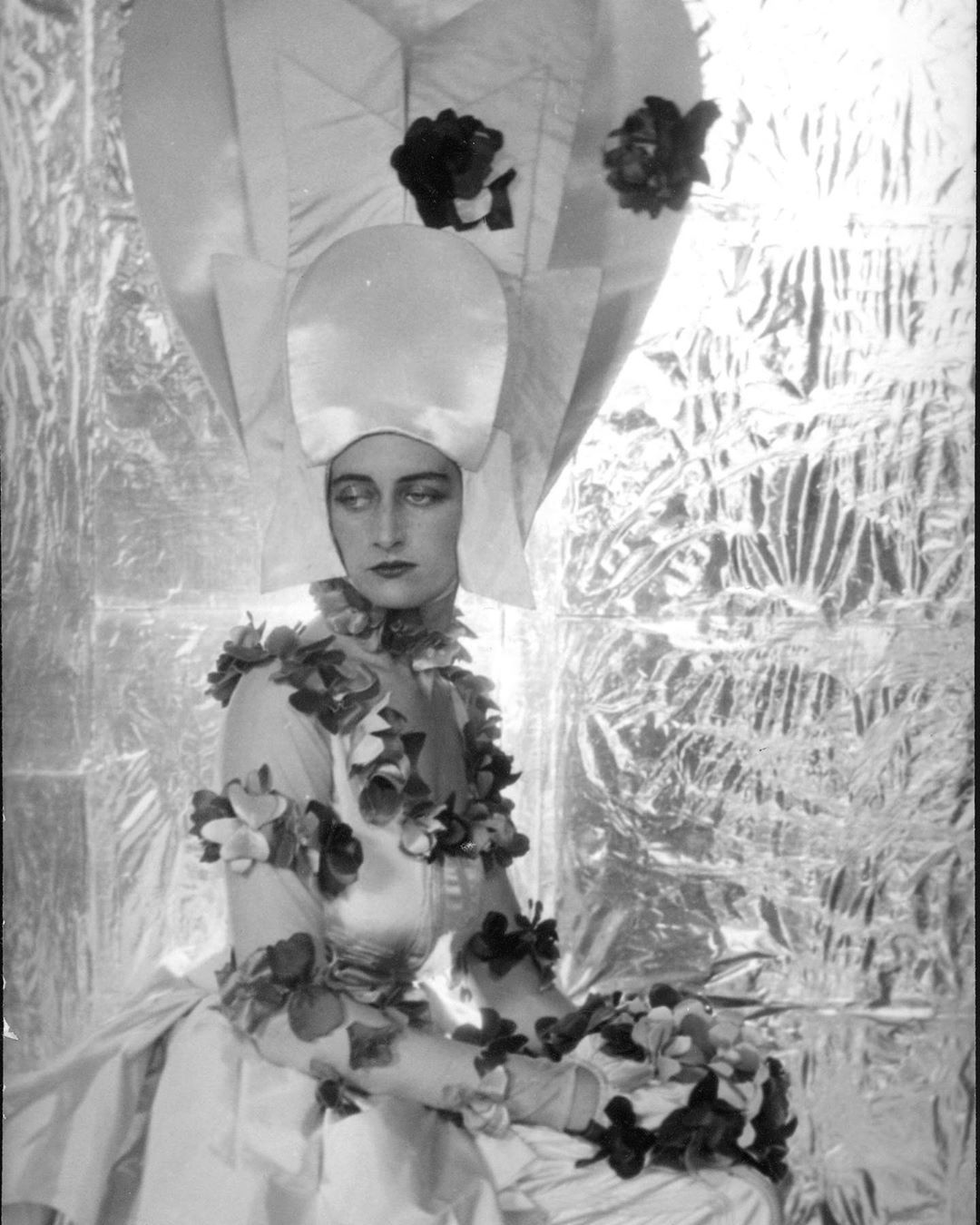 Beaton became the photographer for the royal family, and produced this striking coronation image of young Queen Elizabeth II 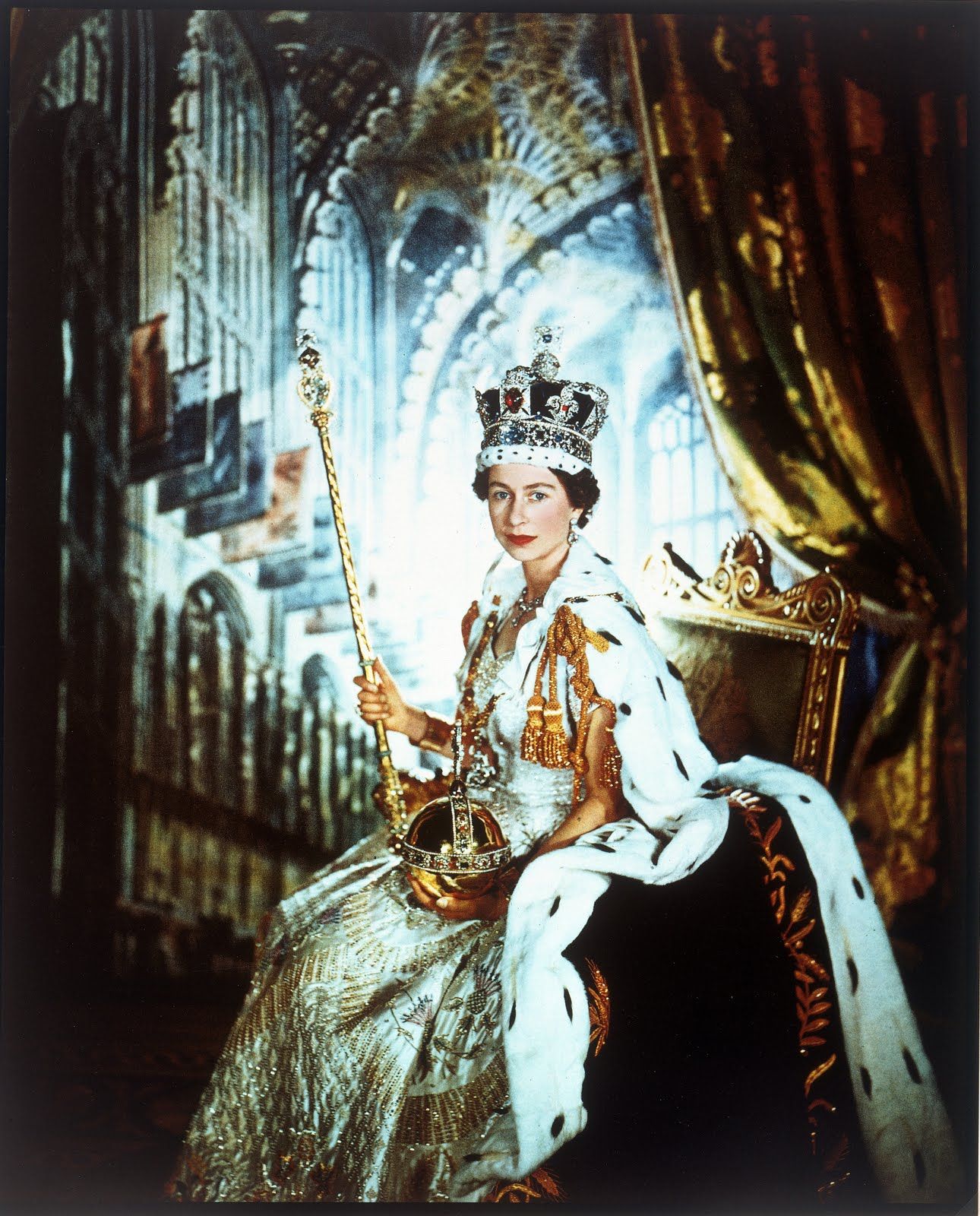 He also did this photo of the queen’s sister 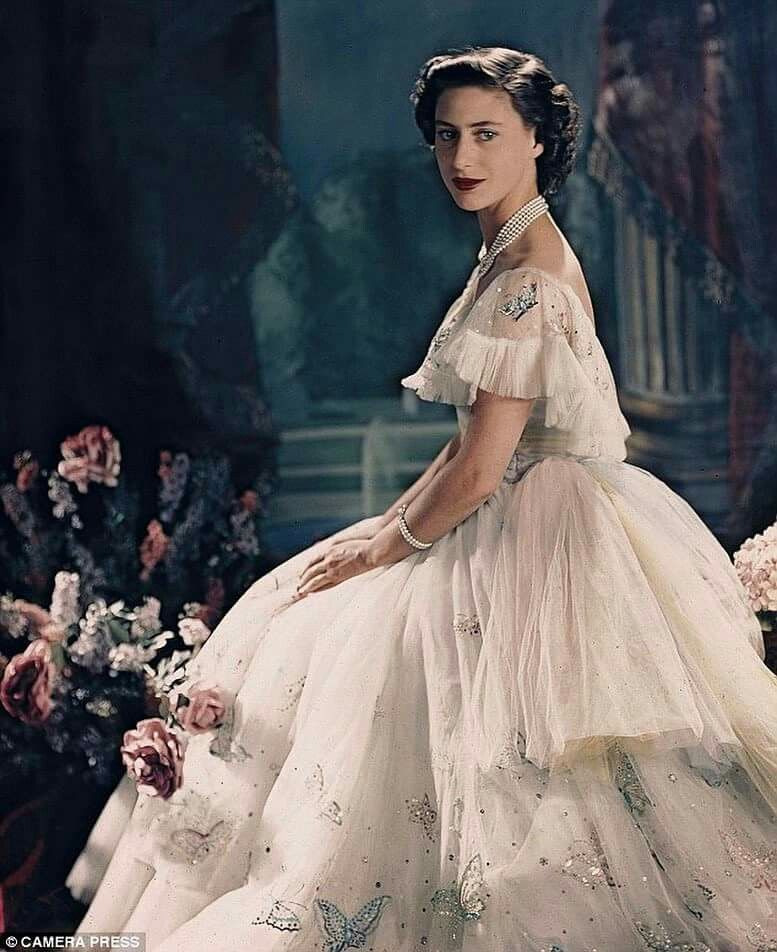 Apparently, Margaret’s future husband, Lord Snowdon attempted to offere advice to Beaton for the photo. The cheek of the man!

The thing that interests me most about Beaton is that he lived well. Just after the second war, he purchased this house It is Reddish House,

Whilst the history of the property can be traced to the early 16th century, the house as it currently stands appears to have been developed in the early 18th century, when owned by a series of three absentee landlords all sharing the name Jeremiah Cray. The construction and design appear to show a melange of influences of the architectural styles favoured during the reigns of Charles II (1660–1685); William III and Mary II (1689–1702); and Queen Anne (1702–1714).

Beaton added rooms on the eastern side, extended the parlour southwards, and introduced many new fittings. Greta Garbo was a visitor.[3] The upper floor had been equipped for illegal cock-fighting at the beginning of the 20th century; Beaton used the cages as wardrobes to store the costumes for his play “The Gainsborough Girls”. In 1971 he added a water garden in the meadow at the front of the house with a walkway and playground, the Elysian field which still exists.[9] Beaton also added the indoor “Winter Garden” with a glass dome roof and a small pool in the marble floor.

Not all of his work has been praised by historians.

Here is a photo montage that takes you through the house. I found this photo to be fun indeed! Then again, I have a thing for things green! Like this And BTW, Reddish House is on the market. It could be yours for a cool £4 million.

Last weekend we set off on our first post-confinement adventure. Where better than to one of my most beloved towns of Beaune in the Burgundy region. During our first trip to Beaune four years ago, we had become smitten with the history and charm of this picture-perfect town and vowed to return. Given the need for social distancing, biking through the vineyards made for an enchanting weekend escape.

Dave Lebovitz has been thinking and I don’t blame him. He enjoys a pretty comfortable lifestyle in Paris, cooking, eating out,  writing the occasional food or cocktail book and blogging. Meanwhile, back in the states, he can’t help but notice there is a lot of anger on the streets.

Is food writing relevant at this particular moment?`Food for thought.

Well, perhaps it is, as long as those of us who still enjoy a good meal when we can get it don’t take a “let them eat cake” sort of attitude.  Perhaps we might focus on “staples” like bread.

Dave does that in this blog post, and gets into a riff on Parisian bread. I enjoyed it!

Yes, it is a custom made Vespa. I would not ride this downtown to catch up with the demonstrations!

You might be a bit nervous about staying at a hotel. How about this as an alternative?

Yes, it is a houseboat anchored off Key Largo.

AFAR lists a few options of this sort for you and the germaphobe you love so much!

I have heard folks say that the pandemic will change the way we live. I am skeptical about that. Did the 1918 Spanish Flu change the way people lived back then?  Not that I know of.

But there may be other trends at work that the covid pandemic speeds up. For example, if our current economic messtoid persists, we might start re-thinking our love of  the consumer society.  Not that shopping  is ethically questionable in itself. I like and chase after nice stuff as much as the next guy.  But I refer to a state of mind where shopping is a main source of pleasure. Shopping for the sake of shopping.  Wearing out the old credit card.

That is where the Indian concept of jugaad comes in. This post explains what it is all about — in sum, it is resourcefulness in making do with less.

Jugaad rejects consumerism by necessity and shows the astonishing possibilities that arise when people are forced to make do with what they have.

Enjoying what you can do with what you have rather than pining after the stuff you could buy.

I am reminded of my great aunts who lived through the great depression as adults. Saying that they were frugal would be an understatement. They liked nice stuff. But they also  took pleasure in not shopping, and their conversation often was about how they fixed stuff to get more use out of it. They were baffled by my generation who were and are addicted to buying new stuff when we already had perfectly good stuff.

My point – consumerism  is not a universal human characteristic. It evolved in a given time and place for certain reasons. And that means we may grow beyond it.  Instead of wandering around the mall, we might enjoy a walk in the woods, or planting veggies.

A walk in the woods? This post celebrates  the  freedom that one feels enjoying simple things. Here is a peek

There was, and is, nothing like bumping softly through a forest, feeling the cool air on your skin, as the sun trickles through the treetops and turns fiddlehead ferns into glowing, otherworldly creatures. All we’d hear were birds and our Volvo as it rocked toward its destination. And suddenly, we’d be there. The forest would give way to a grassy field with two A-frame wood cabins, a small pond, and in the distance, a fringe of trees guarding a steep cliff that overlooks Samish Bay. Freedom.

Not convinced? How about this?

It was the kind of freedom that I hear people say kids don’t have anymore. I don’t know if that’s true, or if it’s what everyone says as they age, but I do know that Samish is where I learned to watch and appreciate the world. During the summer, we’d often spend weekends up there; sometimes an entire week. We didn’t have a TV or video games or even a radio, just endless free time and our imaginations. Our grandfather would set up a croquet course and we’d play a lawless version of the game (rules, schmules). Or we’d spend hours trooping through the woods, making up elaborate stories (magic and a fairy named Poppy were recurring themes) and hunting for the perfect marshmallow sticks. Aleia would search for salamanders by the pond’s shores while I’d row our tiny inflatable boat into the middle of the water and just sit and read.

Getting into it?  We’ll see if this catches on!

His post on this is worth a look. I am totally with Scott on the idea of re-valuing relationships as opposed to buying more stuff.

Money is a vehicle for the transfer of time and work from one entity to another. So, if we spend less money on one thing, we can invest more time on another. Could we invest less in stuff, less in commuting, and more in relationships? I’ve been howling in the money storm for so long. Believing my worth to others was a function of the stuff I had, or didn’t have.

Not that stuff is bad. But people can indeed be more fun than chiars.

We proffer admiration, affection, and a sense of awe on people who aggregate wealth. But that affection is often misplaced, as wealth can lead to greed and lack of empathy. This is an opportunity to spend less on stuff, spend less time commuting, and reallocate that capital and time to our partners and children.