The bikini—named for the Bikini Atoll in the South Pacific’s Marshall Islands, where the U.S. tested nuclear weapons—was a sensation when French designer Louis Reard introduced it soon after World War II.

here is good old Louis working on his design

But Reard did not originate (the bikini): Mosaics in a Roman villa from 300 B.C.E. show women athletes wearing similar skimpy two-piece apparel.

I think this is what we are talking about

But wearing a bikini in the 1950’s could lead to trouble. Here a police officer writes a ticket for disturbing the peace? to a bikini wearer in 1957. 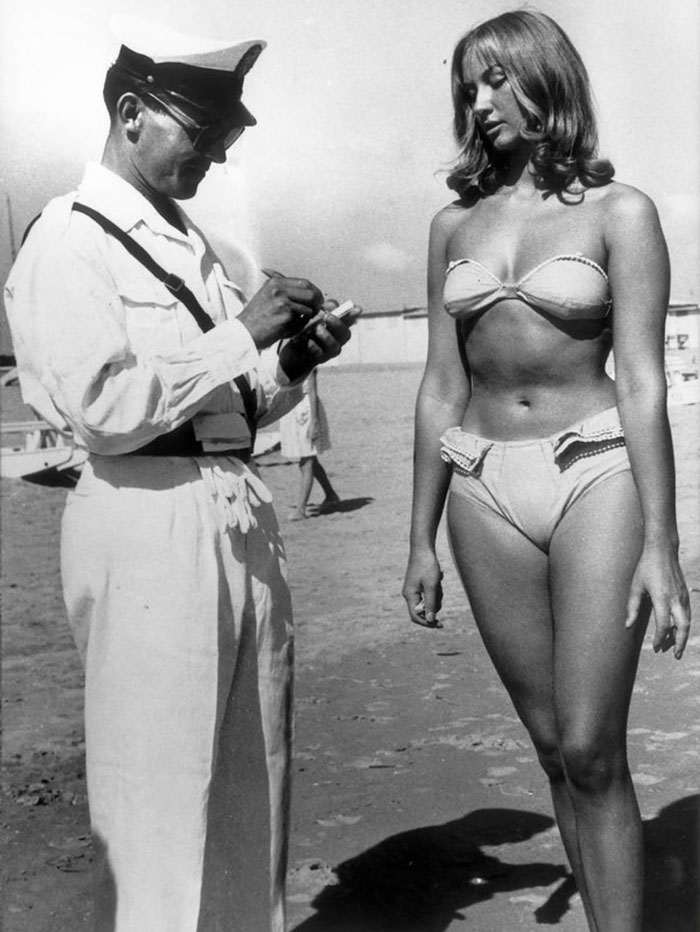 Acceptance of the style took time in the USA—as the 1960 radio hit “Itsy Bitsy Teenie Weenie Yellow Polka Dot Bikini” suggests, wearing one was not for the shy.

The scanty swimsuit has come full circle and is now the uniform for women’s beach volleyball. 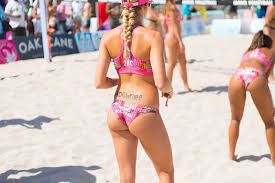 The recent trend towards more revealing beach attire  is rather extraordinary. Not too long ago, women would only venture into the water in “bathing machines”

… the purpose of the bathing machine was all about those crazy rules of bathing etiquette that they upheld in the 18th and 19th century, which kept women and their beach bodies out of sight (while the men frollicked freely on the beach, of course). The wooden carts with two doors on either sides allowed bathers to change out of their clothes and into their bathing suits without having to be seen by the opposite sex walking across the beach in ‘improper clothing’, which in those days, on the gender-segregated beaches of Europe, would have been the modern-day equivalent of the walk of shame. The four-wheeled box would be rolled out to sea, usually by horse or sometimes human power and hauled back in when the beachgoer signalled to the driver by raising a small flag attached to the roof. Some machines were equipped with a canvas tent lowered from the seaside door, capable of being lowered to the water, giving the bather greater privacy.

That makes one wonder about the history of nudity in general. We know from the Roman mosaics that prudery was not always the norm. How did things change so drastically?

The usual suspect is the Catholic Church in its insistence on chastity, etc. But it appears that up through the middle ages stripping down was still not such a big deal.

The Middle Ages saw a resurgence in bathing, both in indoor bathhouses and open air, and was largely still without clothing. Contemporary illustrations depict men and women bathing together, either nude, or with cloth wrapped around the groin. The end of the era saw more restrictions placed on bathing attire; a 1548 German law required bathers to wear drawers or cloth around the waist or pay a fine.[1] 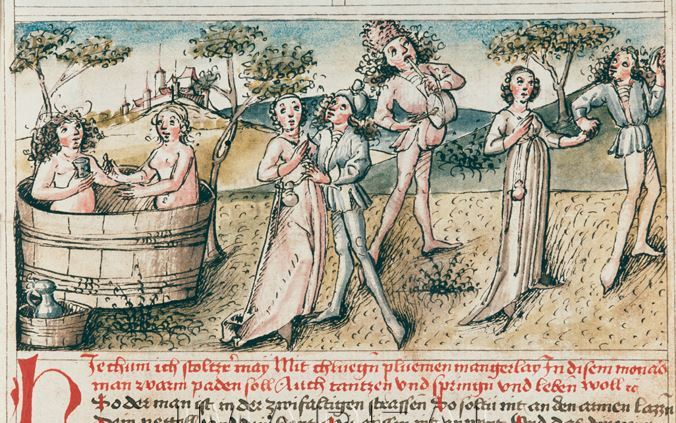 The Renaissance brought changes in how one viewed the body

The rediscovery of Greco-Roman culture in the Renaissance restored the nude to the heart of creative endeavor. Nude figures based on antique models appear in Italy as early as the mid-thirteenth century, and by the mid-fifteenth century, nudes had become symbols of antiquity and its reincarnation.

This  led to some surprising fashion trends. For example

Woodcut illustrations of ballad-sheets, such as the Roxburghe Ballads, depict what purports to be a courtly fad for topless fashion, …

And even Queen Elizabeth  herself dabbled in it

The French ambassador diplomatically described seeing Queen Elizabeth dressed to reveal “the whole of her bosom” (“tout sa gorge”). Campaigners against such low-cut apparel railed against “these naked paps” with “their round, roseate buds immodestly [laid] forth” in unashamedly public display.

In the Renaissance, swimming and outdoor bathing were discouraged in the Christian West and there was little need for a bathing or swimming costume

All in all, one can make the case that our current attitudes reflect a more healthy approach to the human form — with one serious exception.  Even as we suffer from an epidemic of obesity, one is still expected to cover up unless one has a “perfect” body.  We are still not as comfortable with this 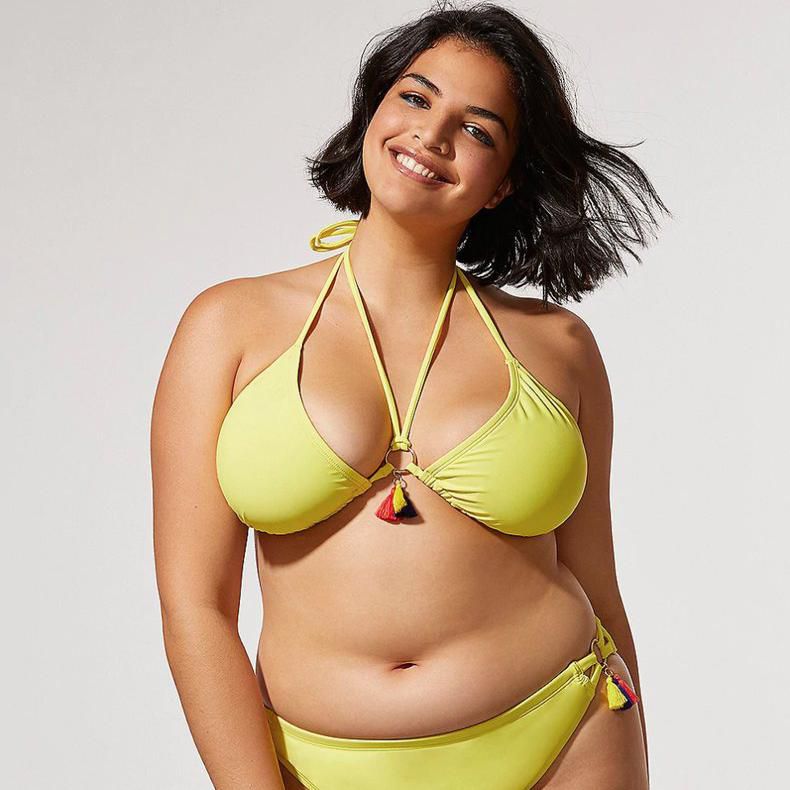 Yes, I am a fan of pretty much anything and everything that relates to Audrey. 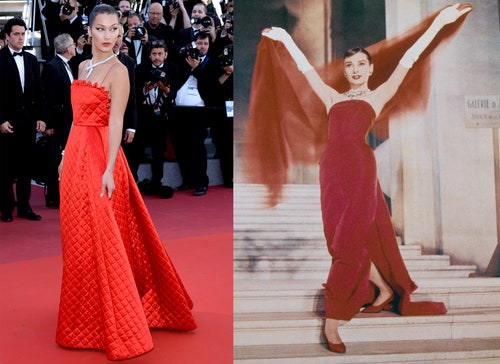 Sure, we are not about to travel there today. But it might not be a bad idea to get ready for your post-corona visit in order to scope out the fashion labels you dream about.

HIP Paris offers a peek at what is on offer!

How to describe the idea behind Agnona”s new men’s line of clothing?

… a rugged take on Ivy League dressing, a kind of European view of American prep that knocked out any stuffiness.

How does that work?

The relaxed attitude permeates every element of the collection, especially the choice of fabrics: cashmere tweed, soft leather trim, cashmere-silk blends. Agnona is expert at making knitwear, and there is no shortage of excellent examples here, some even produced using seamless knitting to improve fit and feel. That treatment was given to the luxe cashmere styles, which come in a multitude of heavy gauges that should be able to combat even severe chill.

Here is a promo on Agnona.

And why is Agnona re-opening its men’s wear collection? Apparently, the market for men’s wear is booming. Who knew?

There are at least 5, and here they are!

I would incorporate one or more of these into a “fantasy journey”. Perhaps this one

Not strictly in Italy, The Trenino Rosso del Bernina or “Bernina Express” is one of the most spectacular choices for lovers of train travel with a train that takes you along the alps across bridges, snow-capped peaks, mountain passes and deep gorges, thus connecting Italy’s city of Tirano with Switzerland. In fact, in 2008, Unesco classified the railway as a world heritage site for this vital connection between the two places. Considered one of the steepest journeys on the planet. Its panoramic train carriages allow for a 360° view as the train travels across the Bernina Pass at 2,253 meters of altitude, before it descends toward St. Moritz. 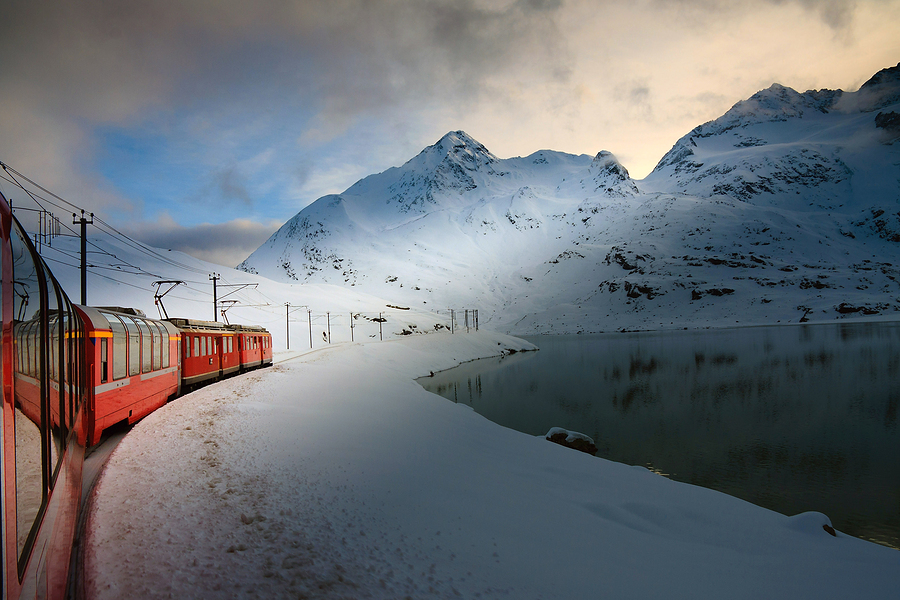 How about this image? 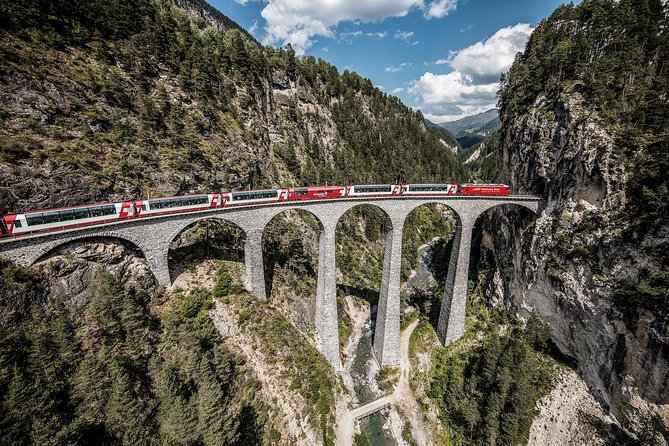 Good question. For more years than I care to recount, I cared not for my outer coat appearance. I thought functionality ruled and layering was king.

I was right. Functionality is key. Layering is key in order to feel comfortable.

But I would not want a lot of pictures taken of me in the snow.

And this link may be a good starting point.

Here is the back story

Here he is in a classic image with Marlene

Grant was one of the most stylish men of the last century. No doubt about it. And he cultivated his style over his career. He did so because he knew that it was his calling card. Others might have been better actors or more amusing. But Grant proved that folks would come out and pay money just to get a taste of his stylish screen persona.

Here is his style story.

The thing I like about this story is that Grant achieved his style hall of fame stature by being understated. He was not into fads. Nor did his clothes draw attention. He wore the clothes. They did not wear him. Simplicity with high quality.

That works for me. How about you?