You probably remember the final scene in Casino Royale. It is a beautiful day on Lake Como. A man pulls up to a villa on the lake. He gets our of his elegant automobile and takes a few steps. As he looks out over the beautiful lake, his phone rings. He answers and a voice says “Mr. White. We need to talk. ” As he asks “Who is this” a shot rings out. He falls to the ground. In considerable pain he crawls to the steps of the villa.  From the side, we see a man walking slowly up the steps. He is carrying a short rifle with a silencer.He says

“The name is Bond. James Bond”

Here is the video. Enjoy!

It is a classic scene. But which villa is used for this scene? It is the Villa La Gaeta.

The villa was built in the twenties by Gino and Adolfo Coppedè for industrial Ambrosoli and takes its name from the peak on which it stands. It was built on the site of an earlier building , with a particular style that is very eclectic. It has the shape of a castle with medieval and Renaissance while the grounds are of the Art Nouveau period .

Gino did beautiful buildings in Genoa, Florence and Rome. It is his work in Rome that interests me here. It is called the Coppedè disricr, and it is a gem that few know about.

Coppedè, brainchild of architect Gino Coppedè (built 1913-1927), is a jumble of historic styles such as Art Nouveau, medieval, Baroque and ancient Greek all whipped together in a dramatic frenzy. Nature is the principal inspiration; daring and eccentric curved lines seek freedom from tradition, coexisting with modern sensuous ironwork. Coppedè is Rome’s answer to the Gaudì structures of Barcelona.

Here is a peek

The epicenter of the Coppedè quarter is Piazza Mincio. The entrance of the quarter is located on the side of Via Tagliamento, marked by an impressive arch, decorated with a wrought iron chandelier. 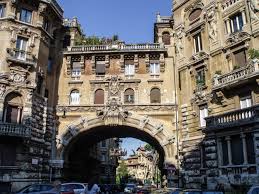 Here is a fun guide if you want to stroll through. It has directions and a few tips, including where to have lunch . STREETART. That looks like this

And you might check out the other commissions that this very cool architect  completed.